The Plague, by Albert Camus 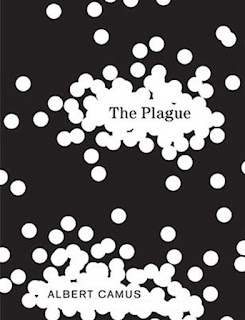 In an unremarkable, mid-sized coastal town in colonial Algeria, rats start dying in the streets. Dr Bernard Rieux, a conscientious General Physician, is concerned, and when the first human casualties take place, tells the town's municipal authorities that they are likely in the early stages of the plague. His diagnoses is treated as alarmist, the name, 'plague' is suppressed and official notifications remain mild, advising only 'caution' and not taking more concrete steps.

Within weeks, the town is gripped by an epidemic and has to be shut down, the doctors are overworked, supplies are low, the authorities are flailing, makeshift isolation centers have to be made, and people are dying faster than they can be buried.

The town, named 'Oran', remains isolated from the rest of the world. Families and lovers are separated, the town guard assumes the status of keepers of the peace, quarantines and isolations mean that even when a loved one dies, they are buried, and later cremated, alone.

There is heroism too, in the efforts of Rieux and his fellow-doctors, in the army of volunteers that helps, from the acerbic Priest, Father Paneloux, to the journalist Rambert whose first instinct is to smuggle himself out. The Plague comes for young and old, rich and poor, and as months pass, Oran is under a pall of gloom that isn't sorrow so much as hopelessness. The newspapers print a daily death count, which is observed with morbid interest. The theatres show the same pictures shows over and over, and the people watch anyway.

And the people lose their sense of self, and find that even waiting seems pointless, and hope is gone, and there seems nothing to live for. They burn their own dwellings and defy the lockdown, they run to the gates to get shot rather than endure the confinement.

The writer brings out all this through the eyes of characters at the forefront of the battle against the plague, but without a hint of sentimentality. Rieux and his friend Tarrou, love-lorn Rambert and ageing bureaucrat Grand, firebrand preacher Paneloux and profiteer Cottard. Each has his part to play in the travails of Oran, and they do play it as humans do; some heroically, some cowardly, some forced into it and some standing up to be counted when it matters the most.

The language (as translated) reflects the subject material, alternating between bursts of dialogue and emotional depth and passages of torpor, as though his words too should be in consonance with the course the Plague takes and the emotions of the people of Oran under their 'imprisonment'.

And finally, if that all sounds familiar, that's because it is; and Albert Camus, who wrote 'The Plague' in 1947, was writing about more than an infectious disease.

'The Plague' is a chronicle not so much of a sickness but about humanity, about dignity and about the innate value of hope, however dormant, however deeply-buried. It is about invisible enemies of all kind, whether Gods or monsters, real or imaginary. It's about the Nazis, and the dictators, about police oppression and the power of the wealthy, about inequality and cowardice, about bravery and faith.

It's about the importance of ploughing on, in whatever little way we can, even when the cause seems hopeless.

And Camus, who knew only too well that evil had not ended with the defeat of the Nazis any more than disease had died out with the end of the last pandemic, gives us a chilling warning through the last lines of the book:

"He knew what these jubilant crowds did not know but could have learned from books: that the plague bacillus never dies or disappears for good; that it can lie dormant for years and years in furniture and linen-chests; that it bides its time in bedrooms, cellars, trunks and book-shelves; and perhaps the day would come when, for the bane and the enlightening of men, it roused up its rats again and sent them forth to die in a happy city." 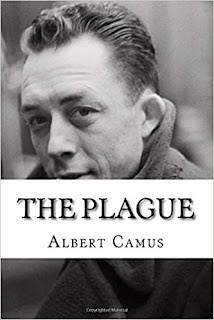