Book Review: I See You, by Aindrila Roy

This review has been republished in 'Unbound E-magazine, Issue #3' along with another story by me, and several excellent contribution by other authors.

You may buy the magazine at Amazon at this link. 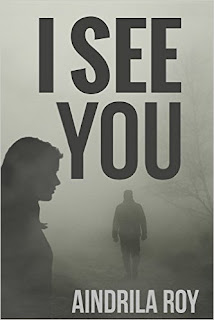 I remember a discussion with Ana a while ago, when I said,

“It’s a tough business being an author these days, if it wasn’t, everyone would be doing it.”

To which she replied,

“But everyone IS doing it, Percy. So how tough can it be?”

As with everything that Colombian beauty says, this too, was a statement that led me to think. How difficult is writing, really? Most people are functionally literate now, even in India, and all it takes to write a novel these days is to hammer enough words together. A knowledge of language has become dispensable, and nowhere is this more evident than in the rash of romance and thriller novels that are doing the rounds. Thankfully, the horror genre is a little more difficult to pollute, perhaps because it’s harder to write. A writer has to be able to use the words to create not just pictures, but a psychological state of mind in the reader’s mind, a state that is not only one of fear but also anticipation.

I See You, the debut novel by Aindrila Roy, succeeds in doing exactly this.

The book follows a short period in the life of the protagonist Liam Redmond, a young man who is the heir to a restaurant-chain fortune. We are introduced to Liam as a disturbed young man whose hitherto fairly-placid life is thrown into upheaval by a series of inexplicable events. Despite the assistance that his friends Max, Griffin and Brandon try to offer, Liam’s troubles show no sign of abatement, and as the days progress, his grip on reality seems to become looser and looser. Thrown into the mix is a vindictive ex-girlfriend, Lilly and the brilliant cat, Nyx. Coming into the narrative a little later are Liam's boss, Dave and his presumably-cuckoo girlfriend, Yvonne.

Using these characters, the author weaves a story set in the heart of suburban America. Beneath the ordinariness of the parks, the malls and the parking-lots, lurk forces that are either psychological or metaphysical, and Liam is left wondering which of these is truly impacting him.

It is a strongly plot-based novel, so I shall avoid getting too deeply into the story, but suffice to say that despite the relatively short length of the novel, Ms Roy succeeds in fleshing out her characters to a large extent. Liam’s mental landscape and the changes that occur in it over the course of the novel are depicted with an attention to detail that is heartening in a world where too many novelists think the ‘story’ is all that matters. Ms Roy’s style is reminiscent of King, without getting into the digressions that the master is known for. The use of language is razor-sharp, with hardly a word out-of-place, and the pacing of the plot is handled exceptionally well. The second half of the book leaves the reader glued to the page, and interruptions during this phase may well result in the reader barking angrily at the miscreant (as this reviewer’s family members would attest).

There is little to find fault with. A niggling editing error or two, at most. If anything, I came away thinking the author might have developed this even better and added about fifty pages to the narrative that would only have enhanced my enjoyment of it.

Characters, as I have said before, are distinct and believable. From Liam’s bosses to his room-mates, to the model of feline behaviour, Nyx, each one has a voice and story. In a genre where bringing in an entirely new element is almost impossible, the language and story-telling skills of Ms Roy are sufficient to capture and hold the reader’s attention and that is no mean feat.

TL:DR: I See You is a thoroughly enjoyable afternoon (you don't want to read this at night. No, really.) read, with a pacy, flowing narrative that is definitely worth the money and time invested in reading it.

Disclaimer: While I am acquainted with Ms Roy through social media, the book has been purchased and reviewed of my own accord, and without any prodding, gentle or otherwise, from the author.