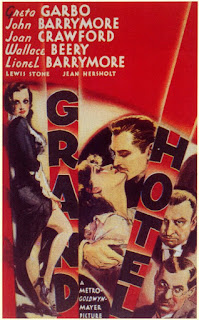 Dr. Otternschlag, a disfigured World War 1 veteran says these, the opening lines of 1932’s Grand Hotel, and it is already evident he will soon be proved wrong. After all, no one’s going to make a film about nothing happening, and certainly not on the scale that MGM made Grand Hotel. For, in a time when studios zealously guarded their star power, only serving them out in moderate, digestible spoon-fuls of one or at best two from their A-list in a single film, MGM served up no less than five of their, and cinema history’s, most dazzling stars.

The Barrymore brothers, John and Lionel. Wallace Beery. Greta Garbo. Joan Crawford. Each one could, and did, carry films on their own, and yet the studio found this story, adapted from a novel and already running as a musical on Broadway, worth investing their resources into, on this scale.

That alone would make this film a significant piece of film history. Add to that its Best Picture win at the Oscars and the fact that it is this film that contains the line that pretty much became Garbo’s motto—I vant to be alone—and you have enough reasons to see the film for that historical value alone. Certainly, when I decided to watch it, I was not hoping for much more than an interesting historical artifact.

The opening scene shows three of our protagonists using the payphones in the hotel lobby to speak to someone on the other end, and establishes their characters in a few deft lines of dialogue, a device that is now so standard in films that we don’t even realise it’s being used.

The Baron (played by John Barrymore) is genteel, refined, and deeply in debt.

Otto Kringlein (played by Lionel Barrymore) is an accountant who has learned of his terminal illness and plans to spend his last days enjoying the grandeur of the hotel.

Preysing (played by Wallace Beery) is a pompous capitalist with an inflated pride and sense of moral superiority, who nonetheless is actually heading a failing company (and incidentally, Kringlein works at that same factory).

A little later, we encounter the women—

Grusinskaya (played by Greta Garbo), a Russian dancer who seems to have fled / been exiled for her Tsarist sympathies from the Soviet Union. She is caught in a vicious circle—dwindling audiences for her shows have left her depressed, her depression leads to her heart not being in her dancing, with her heart not in it, her performances are not well-received, and the audiences dwindle.

and Flaemmchen (played by Joan Crawford), a freelance stenographer with no money, an early example of the sexy-secretary archetype, no doubt, who is not unwilling to use her considerable charms to make some, though she is also starved for affection and friendship.

The ensemble characters follow their individual arcs, intersecting and cutting across each other in the opulent lobbies, rooms and corridors of the Grand Hotel.

The Baron tries to balance his innate good nature with the crimes he needs to commit to survive; Kringlein finds friendship in unexpected places; Preysing’s hypocrisy leads his moral façade to unravel quickly; Grusinskaya plumbs the depths of depression as the people surrounding her exploit her for their own ends; and Flaemchhen finds that walking the tightrope between worldly ambition and personal decency is far too difficult to endure.

The scenes blend seamlessly into one another and the pace is quick—one does not, for a moment, feel too far removed from the main action—this is no shuffling period piece, it’s the Grand Hotel, and for a place where nothing ever happens, there sure is a lot going on. The film uses a large cast of extras beautifully, creating the impression of a bustling, living place rather than a bland set-piece, which the Hotel could so easily have been. There are lives and stories going on in the background, behind every closed door and every counter, in the tables and the revolving doors.

The camerawork is exquisite, the black-and-white often more bright and alive than many a celebrated 70’s-80’s work. And MGM’s stars deliver, each doing what they need to ensure they are not lost in the ensemble.

Beery is superb in his Harvey Weinstein-esque turn, menacing and despicable in equal measure.

Lionel Barrymore is the heart of the story, a ‘loser’ who effortlessly draws forth our empathy for the dignity with which he faces his fate, something that it takes considerable acting skill to pull off.

John Barrymore is regal, the perfect fallen aristocrat, charming and dignified, threading the needle in the conflict between his innate nobility and his circumstantial villainy.

Garbo plays the dancer with exaggerated mannerisms and dialogue delivery—whether a result of her days in silent films leading her to be overdramatic in general, or as a deliberate nod to how the Tsarist Russians actually were, I could not say. Her power to enchant is undeniable however, and when she says that line, that accented delivery of “I just want to be alone,” there is a moment when we see the anguish in her eyes which, knowing what we know now about her later shutting out of Hollywood and reclusiveness, makes it especially poignant.

And yet, Joan Crawford outshines the divine Garbo (and how many people could claim to have ever done that?) as she smoulders with sex appeal and uses her expressive eyes to great effect. Bette Davis, in one of her classic put-downs, is said to have said of Joan Crawford that she had slept with every male co-star at MGM. Well, that may not be true, but if any of her male co-stars at MGM did not want to sleep with her, they probably weren’t straight. To audiences who saw her on the big screen back then—gentlemen, you may be long-dead, but you had a glimpse of a goddess in a way that we never will, and we will forever envy you for it.

Grand Hotel draws to its conclusion in under two hours, though the time seems to have flashed past us much faster than that. And as old guests check out, and new ones check in, the old doctor repeats himself.

And this time, we wonder whether it is really a comedic line at all. For Grand Hotel is a story that could be made today and you would have to change very little, nothing but the cosmetic details. The issues and themes it touches upon—this, this relic of a film from ninety years ago—they don’t feel aged at all. Grand Hotel is always the same because we are the same, and the world is, and even these intense stories, these great dramatic moments that are so important in that moment, mean very little, really, to others.

For people come and people go, but the fundamentals of human nature remain the same, and Grand Hotel, well, Grand Hotel was never a film about a hotel in 1932, was it?

It was about life.

What do you do in the Grand Hotel? Eat. Sleep. Loaf around. Flirt a little. Dance a little. A hundred doors leading to one hall, and no one knows anything about the person next to them. And when you leave, someone occupies your room, lies in your bed, and that's the end. 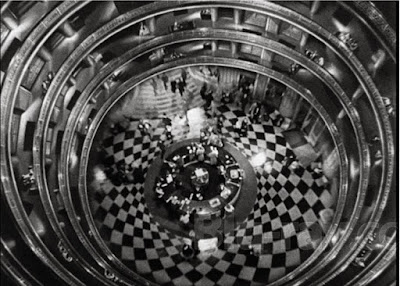