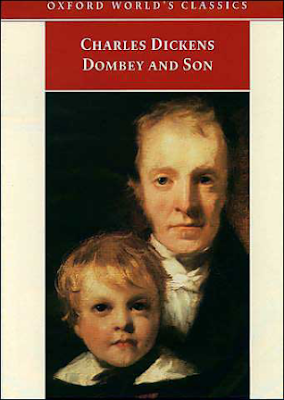 I often go through moments of tremendous self-doubt. Now this is pretty normal in a writer, you’d say, and rightly too. But I have them as a reader too. I look at a book, at the cover (or, on my erstwhile Kindle, at the title) and wonder if I can read it. Will the intellectual effort be too much for a mind that has, of late, read only modern fiction. You know, the kind of stuff that can be read while waiting for someone, between TV shows and just before work.

So I was rather apprehensive about reading something of the size of Charles Dickens’ Dombey and Son. I had read it before, many years ago, while I was in college, and the size of books did not intimidate me, and neither did the name of the author. In fact, I had loved Dickens, his easy ability to play on a reader’s emotions, to take prose to such poetic heights, to paint characters who could be caricatures and yet utterly real at the same time.

Nonetheless, I couldn’t have attempted Dombey and Son without considerable encouragement from a friend who assured me I could still read it, despite my declining faculties.

Review for the people who don’t read ‘Classics’ or only read what does not challenge their faculties.

I have somehow managed to get through the ordeal. I can therefore give you the review, which is very easy to do and goes as below:

“Dombey and Son is an out-dated book covering an out-dated issue (that of the preference for male progeny), full of preachy sentimentality, two-dimensional characters, ridiculous co-incidences, unnecessary digressions and difficult writing.”

Review for the rest of you

If you’re still around, you probably know what’s coming next.

I believe some books are meant to be savoured for what they are. Some issues, at least the one that this book emphasizes, are never out-dated (ask India’s missing millions of girls who die in the womb or soon after birth) and some two-dimensional characters have more personality than real live people who have none.

As for difficult writing, those who find a book like this difficult and can manage to read the bullshit that is published in Business magazines or regulatory guidelines should seriously think about the use their faculties are being put to.

Just as you don’t gulp down a fine wine, or scarf a five-course meal…

or complain about too much sugar in a gulab jamun,

a book by Dickens has to be enjoyed for what it is.

So let’s get to the out-dated, preachy, sentimental, two-dimensional &c &c review of the book, shall we?

It’s the name of a firm. Common enough name, I think. We still have them – the family name followed by & Son or & Sons. Perhaps we never gave a thought to it growing up. Perhaps the patriarchy is so thoroughly ingrained in us that it never crossed our minds to ask “Why only the sons?”

Dombey and Son asked that question in 1846.

The theme is also of pride – the pride of Paul Dombey in the firm that bears his name, a pride that leads him to desire a male heir and neglect his daughter.

'His father's name, Mrs Dombey, and his grandfather's! I wish his grandfather were alive this day! There is some inconvenience in the necessity of writing Junior,' said Mr Dombey, making a fictitious autograph on his knee; 'but it is merely of a private and personal complexion. It doesn't enter into the correspondence of the House. Its signature remains the same.' And again he said 'Dombey and Son,' in exactly the same tone as before.


Of the pride of Jim Carker, who feeds his master’s hubris just as he feels every word that comes from the mouth of his master to be a slight to himself and plots a slow but exacting revenge.

And lastly, the pride of Edith Granger, in whose breast that vice battles with a deep self-hatred, Edith whose only redeeming feature, her love for Florence, is also used against her and adds to the repugnance she has for herself, and eventually hurtles to a fall that the readers can see from afar, though the form it takes, is another matter.

It’s the younger Paul, Walter and Florence, bereft of that vice, who are the moral compass of the story, along with assorted other members of the absolutely stellar supporting cast that is such a Dickensian staple.

And stellar the cast certainly is!

There are characters like Captain Cuttle, gruff, unsophisticated and true, Old Sol Gills, a scientific man, black-eyed Susan Nipper, faithful to the end, silly Mr. Toots, gossiping Mr. Perch, Mrs. Skewton (also known as Cleopatra), the penniless dowager clinging to her youth, Mrs. MacStinger the landlady from hell, Alice the ‘handsome gal’, defiant to the last, and her mother, Good Mrs. Brown, a woman bereft of all dignity, Rob the Grinder, that poor cove, Major Joey B, hey, Josh, JB, always on the verge of choking to death…well, I could go on, there’s the Skettles, the Toodles, the Blimbers, Mrs. Pipchin, Miss Tox, Harriet and John Carker, Mrs Chick, Towlinson, the Game Chicken...but suffice to say that, each named character has a personality and a distinct character, even if he or she only has three lines in the entire 800-page story.

So, yes, if the characters are two-dimensional, let it be added that it’s one dimension more than most authors who have come after him, let alone before, have managed to give theirs. Here we have, in Toots the moneyed dimwit, the blueprint for the characters Wodehouse would immortalise, in Jim Carker the classic toady who hates his boss, a character so real that we see him everyday in office, in Good Mrs. Brown the tragic story of a beggar woman who first exploits, and then laments, her beautiful child.

I do wonder how many of us can yet appreciate that sort of thing any more. I wonder if I will continue to do so myself. The artistry required to create such a range of people, give them all a story, a description, a reason to behave as they do, a distinct persona for each one, to manage them, to have them be where he needs them to be and, by being themselves, move the story along, must be of a high order indeed. But if we are slaves to quick-fix romances, simplified mythology and shock-value mystery, these nuances may escape us, and the loss is probably our own.

The plot is intricate, as it should be. Published as a serial from 1846 to 1848, the story is linear, as was the norm back then, with a few time jumps.

Since I generally follow a “no spoilers” policy for books that deserve to be read, I’ll summarize the book in a series of complex sentences:

Dombey and Son tells of Mr. Dombey’s hopes in his son, his neglect of his daughter, her patience, his pride, his disappointment;

Of Jim Carker’s plotting, his past, his perfidy, his fraternal resentment and his revenge;

She trembled, and her eyes were dim. His figure seemed to grow in height and bulk before her as he paced the room: now it was all blurred and indistinct; now clear again, and plain; and now she seemed to think that this had happened, just the same, a multitude of years ago. She yearned towards him, and yet shrunk from his approach. Unnatural emotion in a child, innocent of wrong! Unnatural the hand that had directed the sharp plough, which furrowed up her gentle nature for the sowing of its seeds!

Of Edith, her pride, her loathing for herself and all the world, the love for Florence that only poisons her life instead of redeeming it, her self-destructive behaviour and her eventual ruin.

An expression of scorn was habitual to the proud face, and seemed inseparable from it; but the contempt with which it received any appeal to admiration, respect, or consideration on the ground of his riches, no matter how slight or ordinary in itself, was a new and different expression, unequalled in intensity by any other of which it was capable. Whether Mr Dombey, wrapped in his own greatness, was at all aware of this, or no, there had not been wanting opportunities already for his complete enlightenment; and at that moment it might have been effected by the one glance of the dark eye that lighted on him, after it had rapidly and scornfully surveyed the theme of his self-glorification. He might have read in that one glance that nothing that his wealth could do, though it were increased ten thousand fold, could win him for its own sake, one look of softened recognition from the defiant woman, linked to him, but arrayed with her whole soul against him.

And that’s really only a part of it, because you read Dickens for much more than just plot. There are passages in this book so exquisite that they made me turn the pages back and read the lines again, speechless with admiration. There are lines that evoke such pathos that even person who is less of a sentimental fool than me might shed a secret tear.

Here, writing about a train journey with such dexterity that you feel you’re in a train at that moment, there, of a character’s emotions with such tenderness that you laugh and cry with him or her, Dickens makes not only Victorian scenes, but a Victorian sensibility permeate the reader’s consciousness, if we receive the writing with an open mind. Much is made of the advent of the railroad here, of the changes it brings in the landscape, in the lifestyles of people and then, in that memorable Chapter where Rob the Grinder loses his position, of the terror that the passing of the hot, metallic, coal-fuelled monster brings to those who live within the radius of the railway line (as, incidentally, I do).

In the end, I’d say it’s a book that deserves to be read. Not for it’s message (though who can say it’s not still a relevant one), and not for it’s occasional digressions where the author tries to moralise (much can be forgiven to a writer who, even when slipping into a normative style, manages to retain his literary merit). But for being a BOOK, with a cohesive story, well-realised characters, for appealing to what’s best in the reader and giving pure literary pleasure along the way.

So that’s Dombey and Son, then. More old-fashioned than out-dated, more tender than sentimental, with a varied cast of memorable characters, with twists and turns that make you wonder as much as shake your head, written in language that should stimulate the artist in all of us.

If you still want to, you can buy it here