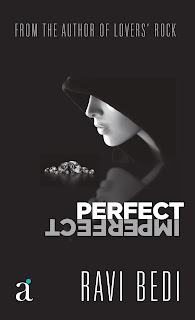 A ‘caper’ novel is a rarity these days, though movies tend to explore the genre more often. Ravi Bedi’s Perfect | Imperfect takes a shot at pulling this off in the form of a tightly-constructed story about two wannabe hustlers from Jaipur trying to stiff a major jeweller by pulling off what they hope will be the perfect crime.

As so often happens, however, their plan is not quite perfect, and what ensues is trouble, with a dash of Schadenfreude-que comedy.

Plot
The story is narrated in first person, mostly by Jimmy Bhasin, a salesman at Gokuldas Jewellers in Jaipur.  Jimmy has a sort-of friendship with his immediate boss, Samarth Jain, whose father owns the shop, and is a not-quite-mute witness to Samarth’s shady practices, both in business and in dealing with women.

The other POV is of Jimmy’s long-term girlfriend, Farah Batliwala, a salesgirl at a fashion boutique in a mall who aspires for something more than a life in the middle-class. Breezily unprincipled, she allows herself to go along with Jimmy’s plans to rob his boss.

Characters
For a fairly short novel, both Jimmy and Farah are well-etched, and their POV’s display their different personalities. Samarth is the only other major character, and we see him in contrasting ways through Jimmy’s and Farah’s perspectives, but the composite is fairly representative of a certain archetype.

The Other things
As a short book, quite tightly focussed on the plot, Perfect | Imperfect does its job quite well. The dialogues are well-paced and the humour in the story is brought out well. At times the language in the book can get repetitive, particularly the number of times Farah’s cleavage and Samarth’s fascination for ‘two-legged birds’ is mentioned. There are times when the language can get a little ‘locker-room-ish’, to use a Trump-ism, but in a first-person narrative this is obviously character attribution.

Conclusion
For a quick and easy fun read, you could definitely pick up Perfect | Imperfect, with its effervescent blend of humour and suspense.

Note
And then there remained only one...
-