BUtterfield 8, Elizabeth Taylor, and the legacies we leave behind. 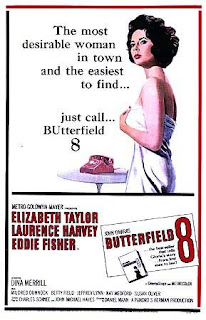 Dealing maturely with a woman’s sexuality has not been something Hollywood got good at overnight. From the time of the ‘Hay’s Code’, the American equivalent of the CBFC to now, one still finds film-makers unable or unwilling to tackle the subject. 1960’s ‘BUtterfield 8’ makes an honest attempt. And if one is going to make a movie about an unapologetic call girl, I suppose one could do worse than cast Elizabeth Taylor. From those striking violet eyes with the double-lashes to the sheer glamour she brought to the screen, she was a ‘diva’ in a sense that modern cinema simply does not lend itself to.

BUtterfield 8 won Elizabeth Taylor the first of her two Oscars, and seeing the movie, it's hard to say it was anything but well-earned. Based on a novel by John O'Hara, BUtterfield 8 is a daring (for its time) exploration of a sexually promiscuous woman - and Taylor plays it with a smouldering sexuality that would put the unfortunately-undressed reality stars of our day in the shade.

The movie begins with a long, loving shot of Taylor, playing Gloria Wandrous, waking up in the bed of a married man, Mr Liggett (Laurence Harvey) - who is not her husband. Gloria is a socialite and model, but her beauty, as she writes in lipstick on Liggett's mirror, is 'no(t for) sale'.

We watch over Gloria's shoulder and Liggett's for a while. We see her through the eyes of her best friend, Sidney (Eddie Fisher), whose relationship with her is a source of much heartburn to his girlfriend, Norma (Susan Oliver), and her mother, who dotes on her, but lives in denial of her daughter's lifestyle. We see Liggett's adoring wife, who is not in denial of her husband's behaviour, but thinks he will mend his ways nonetheless.

Melodramatic in places, BUtterfield 8 nonetheless does an excellent job of getting inside the head of Liggett and Gloria - but it is the latter who is the undoubted star of the movie. Taylor is magnificent, combining her classical good looks with a sensuality - expressed, mind you, through her eyes rather than egregious show of skin - to bring forth a complex character to our screens.

[Spoilers ahead]
But in essence, what makes a movie stand out, for me, is a 'goosebumps' moment. A lot of wonderful movies do not have one, but Butterfield 8, for me, does. A startling line, when Gloria, eyes wide open, tells Sidney about the sexual abuse she suffered as a teenager - and how she felt about it.

What I did not like, though, was the ending, it was too trite - not a happy ending, by any measure, but...well, I suppose Hollywood in 1960 needed the promiscuous woman to either die or become a nun. Redemption in any other form was unacceptable.

Elizabeth Taylor, to recent audiences, might be more famous for her eight marriages than for her acting ability. A by-product equally of the nineties and their tabloid-ization of news as of an ingrained patriarchy that persists to this day is that we know her more as the woman who married Richard Burton twice and a random construction worker once than as one of the finest actors of her time. She had a career that started as a child actor (at the age of 12 in National Velvet, 1944) and continued, despite the usual bullshit that MGM Studios pulled, into the 90’s despite frequent bouts with poor health (she had scoliosis from birth, fractured her spine while shooting National Velvet, and nearly died of pneumonia during the filming of BUtterfield 8). But perhaps even more significantly, she was one of the first celebrities to campaign to find a cure for HIV/AIDS, beginning her activism from 1984. That date is significant – do remember that, at the time, no one spoke about the disease, much less actively take part in any endeavour to find a solution for it. AIDS was a ‘gay person’ disease, widely seen as ‘God’s visitation’ on homosexuals, and President Reagan consciously chose to remain silent (and even, sources say, laughed) about a disease that was killing his countrymen.

To those she helped, though, and to the LGBTQ community, one can only hope that she will be more than her matrimonial adventures, or even the five Oscar nominations (two wins), five Golden Globe nominations (two wins) and three BAFTA nominations (one win), and all the brilliant roles she acted out so wonderfully in the course of her long career.

It will be because of the role she chose to play and what she said without a director telling her to:

“I decided that with my name I could open certain doors, that I was a commodity in myself—and I'm not talking as an actress. I could take the fame I'd resented and tried to get away from for so many years—but you can never get away from it—and use it to do some good. I wanted to retire, but the tabloids wouldn't let me. So I thought, If you're going to screw me over, I'll use you.”

—Taylor on her decision to become a HIV/AIDS activist.

We should all be able to say as much.