Hiring at the Bank 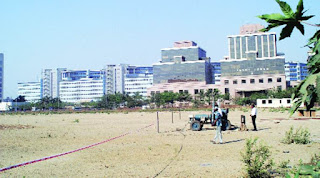 The floor on The Bank's corporate office, on which I spend a few hours daily contemplating the futility of modern life - in other words, the floor which hosts my workstation - is also popular with the Human Resource Department for holding its interviews.

So it wasn't really a surprise when, making my daily break for freedom, I happened to pass a prospective candidate speaking to the HR recruitment manager (who had, I presume, been present for the interview).

The candidate must have expressed some concern that her background (educational/professional) was not suited for banking and whether that diminished her chances.

"Here at The Bank we think out of the box," the HR girl simpered, "we have engineers who have done very well in CBG - Corporate Banking, and so on. We don't recruit people only with a Banking  or Finance background, we believe in hiring all sorts of people so that they too, in turn, are able to, um, think out of the box and bring something different to their teams."

"Typical HR spiel," said my fellow-escapee as the doors of the lift closed before us.

"Topical, rather than typical," I replied.

"Why do you think we hire people without a clue about Banking?"

"Because we can't afford to pay a Banker's salary?"

"Heh. No, not quite. It's because a Banker would realise within a week that The Bank doesn't have the first idea how to do what it's supposed to do - Banking!"

"We're an army made of potters, poets and cooks that is afraid to hire an actual soldier because we're afraid he'll laugh at us."

"Hmm, that does make a lot of sense."

"So do you consider yourself a banker, then? Are you the soldier that's laughing at the rest of us civilians?"

"Me? Hell no, I'm worse than all of you. I'm the court jester that doesn't even want to be in the bloody army!"

"I suppose I'll see you on Monday," she said, as her taxi pulled up.

"As surely as pigs have wings," I nodded back, starting the long walk home.

The dust from the construction site opposite The Bank swelled up before me. I coughed as I strode past, wondering if the poor, uneducated schmucks working their daily-wage jobs to make enough money to buy their next meal, were as clueless about the poison they were breathing as those in the building opposite, which I had just emerged from.

The only difference, sometimes, is in the colour of the collar.
at July 03, 2017

Email ThisBlogThis!Share to TwitterShare to FacebookShare to Pinterest
Labels: Flashfic