Dracula and the Hurricane (Drabble #7 - Come and get it)

DRACULA AND THE HURRICANE 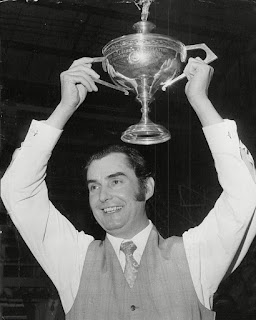 He’s Ray Reardon. He used to work in the mines. He used to be a cop. He really only took snooker seriously when he began to make decent money from it. You were still in your diapers when he won his first tournament.

No, that’s not it. He’s the best. He’s fifty years old, and he’s the top-ranked player in the world. He’s old-world, he’s polite, he’s loved by the club audiences. A pillar of the community, is Ray Reardon. Upstanding guy, Ray Reardon.

He’s got a superb long game. He’s got an outstanding defence. Do what you want to do, Reardon will outlast you. You can work your ass off, chipping away at his game, but Reardon will still be standing, with his slicked-back hair, his broad smile, and his sharp cue, ready to finish the frame and win the match, like an immortal figure, undefeatable, unkillable, unknowable.

Maybe that’s why they call him Dracula.

He’s won this tournament before—four years in a row, six times overall. This is the lion returning to his turf, this is Ray Reardon, the King of the cue-game, the King of Snooker, and he’s here to take the trophy he no doubt thinks belongs to him. 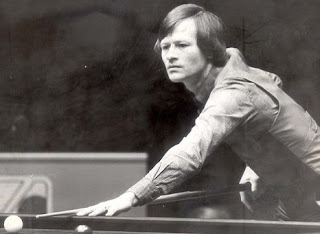 You’re Alex Higgins. You failed out of school. You tried to be a jockey, but you failed at that, too. You never could hold down a job. When you won your first tournament, you were homeless.

Snooker, you see, is the one thing you haven’t failed at. And oh, they hate you for it. You’re brash, you’re unpleasant, you’ve got a foul temper and a foul mouth, and the snooker establishment doesn’t know what to do with you.

But when the cue’s in your hand, when the balls are flying around the table, when the clock is ticking, when the world is watching, there’s never been anyone quite like you. You see angles no one else sees, you try shots no one else dreamed of, and for every time you pull it off, sure, there are three times you don’t—and no one remembers those three times, do they? When you do your thing, you terrify your opponents, who don’t seem to know what just hit them.

Maybe that’s why they call you, The Hurricane.

You’ve won this tournament once before—ten years ago. You were barely twenty-three. Everyone was sure it was a fluke. No one could play that fast, that well, and keep it up. But you did keep it up. Through the smoking, and drinking, and drugs, and women, you did keep your game up. People who had never thought of seeing a snooker match before come to see you play. You took the game out of the pubs and clubs and into the Television, for the ratings shoot up when you come to the table. Yeah, they call you the Hurricane, but the name you prefer?

And you’re here to take that trophy for the people.

And so, as you stare down the table at him, at old Ray Reardon, with his immaculate style and contented smile, his unflappable face and shiny black hair, you know there’s only one thing you can do as you both pose with the trophy only one of you will take away, after 33 gruelling frames played over two days.

You stand there, next to it, a moment longer than he does, wait till the photographers’ bulbs have stopped flashing, and say,