Digging up the past

A long time ago, in a house far, far away...
I had tried to write a novel.


What I meant to do with it, I have no idea. Pretty much thought it was lost to the mists
of time - and mould, seriously, you should see how damp the walls get when it
rains - but then I found the words I had typed out on a clunky desktop
keyboard, which had before that been written
in longhand in a school notebook
with a fountain pen.

Cleaned up some typos and changed the names, but otherwise, presented as is. 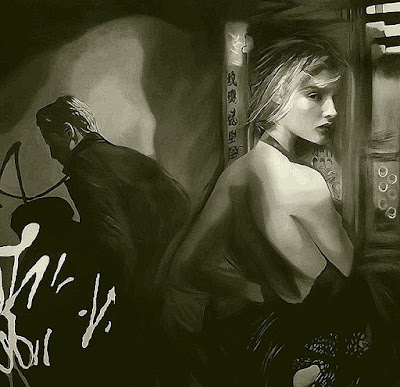 “MANDAR – are you there?” I bawled, as I had been doing at regular intervals all along the way. We had been wandering in the general direction along which he’d have been expected to return for about half-an-hour, during which I must have called out the absent boy’s name at least a dozen times without getting a response. By now we were almost at the exact spot where Tessy DeVitre and I had had our fateful meeting earlier that day – or the previous day to be more exact.

“Is there much point in going further?” I asked Qadir despondently.

“At least upto the St. Patrick’s gates,” said Qadir. “Now that we are out here we might as well go the whole hog.”

“Mandar,” I yelled, conscious that I must, by now, have laid myself open to arrest for disturbing the peace at least ten times over. Thankfully, Sasangaon is a village where the police force comprises of one portly hawaldar and he likes his night’s sleep.

But evidently not everything was in a deep state of slumber – for I heard a groan, a deep groan from the left side of the road. I cast a glance at Qadir, and could tell that he had heard it too. Without speaking a word we rushed in the direction of the sound. In moments I found myself peering into the ditch where Mandar had been trying to piggyback on a pig’s back while I was behaving like a pig with Tessy. We could vaguely make out a figure at the bottom, and it was from there that the groans were clearly emanating. I crawled slowly down the walls of the ditch, leaving Qadir outside, still clutching the lantern in his hand.

“I say, this chap’s hurt,” I said, though I suppose in saying so I was only stating the obvious. I hoisted the man over my shoulder and began to carry him out. The rain had made the surface soggy, and by the time we were out, both of us were caked in mud.

“Who is it?” asked Qadir. More groans from the injured figure. He seemed to be trying to say something.

“Can’t tell,” I said, and taking the lantern from Qadir’s hand, brought it closer to the man’s face. The first thing I saw was that my own hands were stained deep red. I dropped the light in horror. It went out.

“Khwaja, what in hell are you doing, you sop? Now the damn thing is broken,” exclaimed Qadir.

I didn’t answer him for a while.

“Hussein, old chap, blood,” I said at last, using his first name – something that only happened in moments of emotional distress. “I’ve got blood on my hands!”

“What!” he was appropriately shocked.

The deep groan was repeated again and a low, gasping voice said:

That voice, drawn out and pain-filled as it was, was too familiar to be mistaken.

I lit a match and brought it near his face. He closed his eyes immediately as the glare fell on his eye but there was no possibility of an error on our part. Mandar it was, but he looked like no one I’d never seen before. His face was stained – no, dripping with blood, and his eyes, when he opened them, were bloodshot. The very mud on his face and body seemed to be red with gore. The rain had begun to wash away some of the sludge by now and revealed ugly scars on his back. He looked grotesque. But the eyes were alive, as alive and energetic as ever. I raised him to my knee and dashed the flask of brandy to his lips.

“Drink, old chap,” said Qadir, as he tried to wipe Mandar’s face with his handkerchief.