Not a Review of King Lear 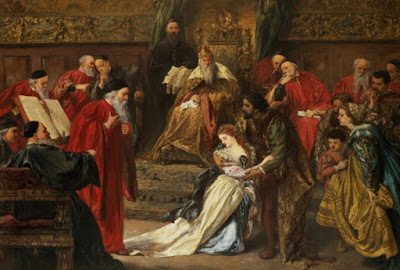 A while ago, I was a part of a discussion on Facebook where a person (I assume he was young) asked for book recommendations, identifying sci-fi as one of the genres he was interested in. Another young friend recommended Asimov’s ‘Foundation’ series. The response was astonishing – the OP essentially said “Yeah no, that’s a classic, I’m not interested.” On being questioned, he elaborated that he was only interested in latest releases because he wanted to read about ‘society as it is’, not about something that was, in the past.

I replied wryly that my plans to recommend King Lear would probably not find favour with him, then, despite the Bard’s work being as relevant today as it ever has been, but since ‘irony’ seems to be one of those nuances that existed in the past and not in ‘society as it is’, the poster missed my point.

It set me thinking, though. What is a classic? Why is it becoming a derogatory term? Personally, I never saw the distinction. When I read Great Expectations I approached it as any other book – to be read from cover to cover. And while the Slacker, aged 9, surely understood very little of the book’s sub-text of human nature in the face of greed and temptation, certain characters were ingrained in my mind even then – good old Joe the Blacksmith, haunting Miss Havisham, menacing Mr Jaggers, ever-distant Estella…and though it was a book set in Victorian England, none of these characters seem dated, to this day.

Ultimately, whether a book is worth reading, or not worth reading, has nothing to do with its publication date or even the times it deals with. If that were so, there would be nothing worth reading in the works of Tolkein or Wodehouse, who both, in their ways, wrote about worlds that never existed. A piece of literature is worthwhile for the emotions it invokes in the reader, for what it teaches us about the human condition, or about the heart, in conflict with itself. And sometimes, it so happens that a grocer’s son who lived 400 years ago, did that so well that superlatives still fall short and situations still come alive.

Like all plays, a textual reading of King Lear is destined to be sub-optimal. Shakespeare wrote plays, dramas, meant to be performed, and not read as dry text on paper. But while one should definitely watch Kurusawa’s “Ran”, or the movie versions featuring Laurence Olivier or Ian McKellan, there is much to admire in the text as well.

Here we have Cordelia, honestly (and a little saucily), telling her father a truth he does not want to hear, and being disinherited for it:

Good my lord,
You have begot me, bred me, loved me: I
Return those duties back as are right fit,
Obey you, love you, and most honour you.
Why have my sisters husbands, if they say
They love you all? Haply, when I shall wed,
That lord whose hand must take my plight shall carry
Half my love with him, half my care and duty:
Sure, I shall never marry like my sisters,
To love my father all. 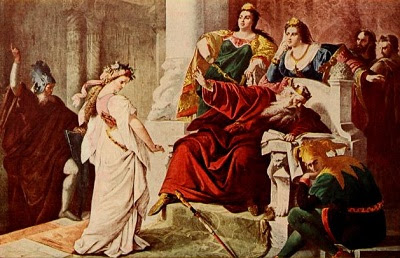 There is intrigue and sub-plots, the Duke of Gloster wrongly trusts his bastard son Edmund over the trueborn one, Edgar, and finds himself blinded and turned out of his own castle as a result. Edgar himself plays at being a madman, dressing in rags and spouting nonsense to hide himself from his vengeful half-brother, and when he encounters his own father, mutters this gibberish: 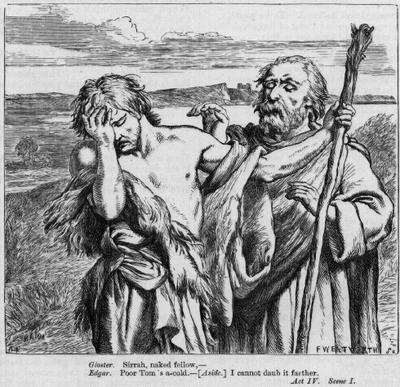 Child Rowland to the dark tower came,
His word was still, - Fie foh and fum,
I smell the blood of a British man.

(Browning ran with the concept rather, as you can see here)

And Lear, stupid old Lear ends up an exile in his own land, having given away his Kingdom to his daughters Regan and Goneril, who after professing filial love in terms that would fit right into the Sanskrit epics, quickly throw their father out into the storm. As with any Shakespearean play, some of the best lines are given to Lear’s Fool. 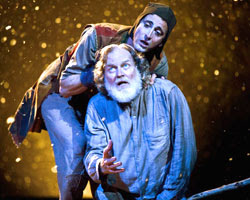 Winter's not gone yet, if the wild-geese fly that way.
Fathers that wear rags
Do make their children blind;
But fathers that bear bags
Shall see their children kind.
Fortune, that arrant whore,
Ne'er turns the key to the poor.
But, for all this, thou shalt have as many dolours
for thy daughters as thou canst tell in a year.

Being abandoned by both the daughters he thought loved him, leaves Lear embittered and delusional.

Rumble thy bellyful! Spit, fire! spout, rain!
Nor rain, wind, thunder, fire, are my daughters:
I tax not you, you elements, with unkindness;
I never gave you kingdom, call'd you children,
You owe me no subscription: then let fall
Your horrible pleasure: here I stand, your slave,
A poor, infirm, weak, and despised old man:
But yet I call you servile ministers,
That have with two pernicious daughters join'd
Your high engender'd battles 'gainst a head
So old and white as this. O! O! 'tis foul! 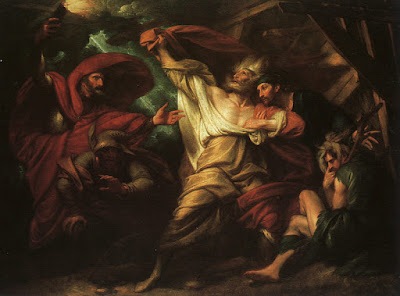 Lear joins up with Gloster and the disguised Edgar, one truly mad, the other affecting it, and they move towards Dover, where the loyal Kent has sent word to Cordelia, now Queen of France, to come to the succour of her father. They meet, but he scarce recognises her for a moment before battle is joined. 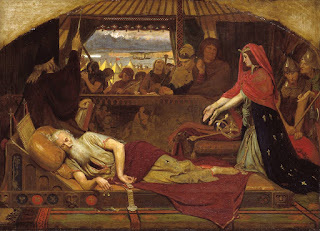 And here, if we expect triumph and redemption, we are to be cruelly deceived. Shakespeare did hopeless long before Dostoevsky, despair long before Rushdie and brutal major character death long before GRR Martin. 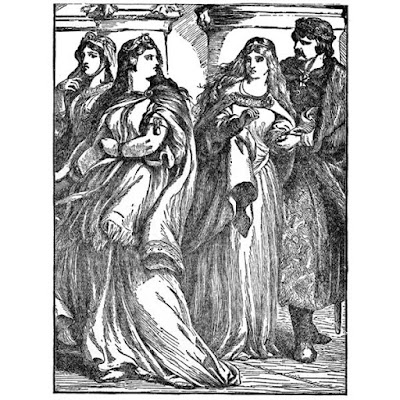 So no, the Gods do not favour the righteous, the battle does not go the way of the ever-loving Cordelia, and she and Lear both end up captive. The triumph of the sisters Regan and Goneril is short-lived, both have fallen in love with the rascal Edmund, and Shakespeare gives them their just desserts off-screen, as a jealousy-induced murder-suicide robs them of any chance at redemption.

EDGAR
What means that bloody knife?

Gentleman
'Tis hot, it smokes;
It came even from the heart of--O, she's dead!

Gentleman
Your lady, sir, your lady: and her sister
By her is poisoned; she hath confess'd it.

Edgar avenges his father by facing Edmund in a duel, and as Edmund dies, he at least tries to redeem himself by countermanding his last orders - to kill Cordelia, but there is no sweet ending for Lear.

KING LEAR
Howl, howl, howl, howl! O, you are men of stones:
Had I your tongues and eyes, I'ld use them so
That heaven's vault should crack. She's gone for ever!
I know when one is dead, and when one lives;
She's dead as earth. Lend me a looking-glass;
If that her breath will mist or stain the stone,
Why, then she lives.

KENT
Is this the promised end

EDGAR
Or image of that horror?

But hope is ephemeral for the wretched King.

KING LEAR
And my poor fool is hang'd! No, no, no life!
Why should a dog, a horse, a rat, have life,
And thou no breath at all? Thou'lt come no more,
Never, never, never, never, never!
Pray you, undo this button: thank you, sir.
Do you see this? Look on her, look, her lips,
Look there, look there! 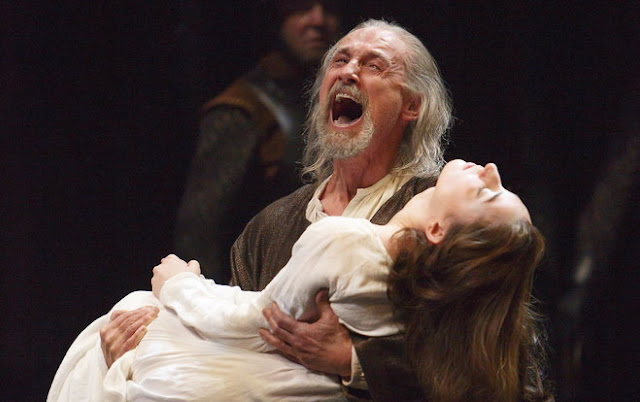 All his children are dead. Though the Duke of Albany offers to return his Kingdom to him, Lear has no reason to live. It is left to Albany, reluctant participant in the atrocities that precede this (he is the husband of Goneril) to utter the final words of this tragedy:

The weight of this sad time we must obey;
Speak what we feel, not what we ought to say.
The oldest hath borne most: we that are young
Shall never see so much, nor live so long.

The play ended there, but it left me wondering – what part of this was out-dated or irrelevant? An over-indulgent father cheated by his children? A foolish man failing to see the true merit of modest love over fancily-decorated avarice? The reality that life is unfair, and no grand poetic scheme of justice exists?

I have no way, and therefore want no eyes;
I stumbled when I saw: full oft 'tis seen,
Our means secure us, and our mere defects
Prove our commodities. 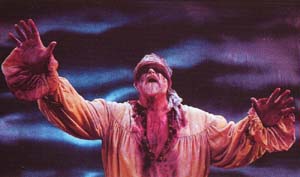