Book Review – Can you forgive her, by Anthony Trollope 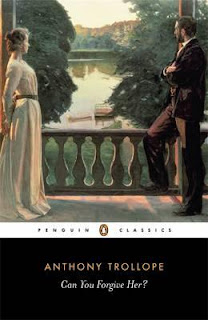 Anthony Trollope’s is not a name that is very widely known outside of aficionados of Victorian Literature. For a man with a prodigious output (his bibliography has its own page, here, and a lot of books are the size of bricks) who was commercially very successful in his time, this is surprising. Many of his contemporaries survived the ravages of time rather more successfully. I suspect it might be that Trollope’s genre – political intrigue – was more topical than the more universal themes of Dickens and Hardy, and for that reason might not be held as relevant today as he was in his day.

Be that as it may, I found myself approaching Can You Forgive Her with a hint of trepidation. For one thing, the title sounded too much like something Ravinder Singh or Durjoy Dutta might come up with, for another, it was huge. Like, 848 pages huge.

Surprisingly, its length hangs lightly on the story. Once I started reading, I realised the Trollope’s style is fairly simple and conversational, with the only difficult words being the ones peculiar to that period in terms of dressing and politics. If anything, this style can get too conversational when Trollope engages in author-monologues of a sort, breaking the fourth wall and talking directly to us, as readers. (Well, given the title, in which the You of Can You Forgive Her is the reader, that’s to be expected.)

CYFH deals primarily with the love-life of Alice Vavasor, a twenty-five year old girl of moderate fortune but high birth who is connected by birth to some of the highest nobility in the UK. It begins with Alice having recently become engaged to the respected country gentleman John Grey, after having broken her prior engagement with her first cousin, George Vavasor, heir to the Vavasor family estate. However, Alice has doubts regarding Grey, occasioned partly by a lingering fondness of her cousin George and partly by a revulsion for Grey’s lack of ambition and his contentment in living quietly in Cambridgeshire. How she conducts herself, and deals with pressure from her aunt Lady MacLeod and her father John Vavasor, who dearly want her to marry Grey, and from her cousin Kate, sister of George, who wants her to marry her brother, constitutes one of the two major threads of the story.

The other is the married life of Alice’s maternal (and much more aristocratic) cousin, Lady Glencora M’Cluskie, an heiress of fabulous wealth who had been induced by family pressure to reject the handsome but worthless Burgo Fitzgerald in favour of the rising star of British politics – Plantaganet Palliser. Glencora’s youthfulness, her worry at being unable to provide the House of Palliser with an heir, and her never-extinguished love for Fitzgerald are a sharp contrast to the mature, industrious, hard-working and tepidly affectionate Palliser. Alice becomes the only friend Glencora has, and for better or worse, has to be her mercurial cousin’s conscience-keeper.

n addition to this, a more light-hearted story is told of Alice and Kate’s aunt, Arabella Greenow and her two suitors – Captain Bellfield, the impoverished soldier and Mr Cheeseacre the wealthy but arrogant farmer.

Through dialogues and letters and conversations in grand drawing rooms, outdoor dinner-parties and dingy lawyer’s chambers, Trollope tells a story both of moral dilemmas as well as of political upheavals, and the sordid nature of electioneering of the time is rather reminiscent of our own country’s modern elections. A candidate must be prepared to spend money, take up causes he has little belief in and befriend shady tavern-keepers.

In painting social scenes and in dialogues, Trollope shows a deft and sure hand. His characters are well-drawn, and the female characters are placed definitely at the centre of what is a political novel as well as a social one. It would even pass the Tibett Test rather comfortably. I did find the author monologues to be few too many to make for really smooth reading, though, and hope the later novels in the series will have a little less of that.

In his use of sarcastic humour and wry ironies in depiction of some characters (Alice’s father is absolutely appalled that the government expects him to work for his living; Ms Greenow insists her husband has been dead nine months when it’s been barely six…) Trollope recalls Dickens, but the setting and the story is distinctly his own. A chapter on a foxhunt is a perfect depiction of a rural countryside and the activity itself, Alice’s time at the Palliser home brings out the dilemma of a proud woman placed among those who are much richer than her for an extended period of time, and in George and Fitzgerald, as opposed to John Grey and Mr Palliser, Trollope gives us a very interesting spectrum of male personalities.
CYFH lacks the massive disasters and stunning co-incidences that characterise Dickens’ work, or the sensationalism with which Dumas approached royal intrigue, but there is a healthy dose of moral dilemma instead. The proceedings are more serene than sensational, and the result is more a slow-cooked, delicately-spiced continental dish than the brilliant explosion of flavours which the two authors I mentioned earlier in this paragraph served up, and yet it remains eminently enjoyable.

Can You Forgive Her was the first-written of what would come to be known as the Palliser series, and I can definitely say that it is good enough to make me want to read the next book – Phineas Finn, as soon as possible.

TL;DR: Not a typical Victorian romance, but definitely an exploration of that momentous time in history, I would say it is worth a reader trying to find it if she can, in her mind, find it possible to forgive her.