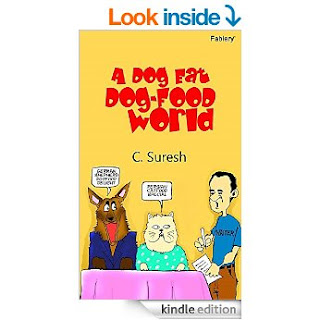 Written as a prompt for a contest to win the book above :) Short due to word restrictions.
Book can be purchased here (Kindle US), here (Kindle India) and here (Paperback)

My review of it is available here

And now - the story:

“So, now that we have met here on neutral ground…” began Sir Alfred Catterton, but Sandwich the Alsatian cut him off.

“Yes, now listen, the Communists and my party, the Aristocats are forming a grand coalition, and we need dog support to beef up our …”

“Listen! So it is likely the media won’t like this. Catnabber Goswami will be spitting at the camera in anger saying we are opportunist…”

“I want a sandwich,” said Sandwich.

“Oh, get the dog a goldfish sandwich,” meowed Sir Alfred to the waiter, closing his paws into fists.

“Oh yes. Damned Home-cats,” grumbled Sir Alfred, referring to the outgoing government, whose tendency to ban things had been at least partly responsible for his party’s return to power. “Fine, beef sandwich, then.”

“Now pay attention, mutt! I need you to go on Catnabber’s show as a panelist and tell him how much faith you have in a Communist-Aristocat Team Government being the only one that will solve the Dog Problem.”

“Yes, good, talk about how you got no food under the Home-Cat government.”

Sir Alfred stretched his paws. It was going to be a long evening. Such were the issues involved in gathering support for the CAT government.