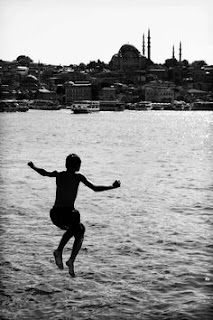 I abhor poetry. To clarify, I consider most poetry a cheap way to garner praise, and far too many poets parasites, leeching away the greatness of the few real poets who still inspire a sense of awe. For poetry - the real thing - has a grace and power to it that prose can rarely match.

Whether the lines below show me to fall into the category of a parasite or of a poet, I do not know. I have never called myself anything other than a hack.

The boys of Aiden can always be found,
Lurking around the pier.
Or swimming in the Cold Stone Lake,
Without a trace of fear.

But there’s been something in the air,
These past fifteen years,
For on their faces I often see,
A distinct hint of tears.

They pine for a vision of beauty, I heard,
Of a child, an actor,
Who lives with her troupe on a barge,
But often performs here.

Silky-smooth are her golden tresses,
Her gaze is crystal-clear,
And when she smiles, the boys do say,
She is without peer.

The young men of Aiden can always be found,
Lurking around the Pier,
Or by the banks of the Cold Stone Lake,
Selling wares from far and near.

But when the day’s work is done,
They sit with mugs of beer,
And sing sad songs, like dirges,
All dedicated to her.

She lives in the Undercity now,
An errand-girl for a smuggler,
But on that face – still sweet, still peerless,
There is no hint of a smear.

Fair of skin and rosy of cheek,
Her gaze, sharp as a spear,
A body that promises so much,
In gossamer robes, so sheer.


The old men of Aiden are often to be found,
Lurking around the piers
Or by the banks of the Cold Stone Lake,
Drowning in their tears.

For sons they have lost, sons who loved,
A woman for many a year,
An errand-girl who became a noble,
A mage without a peer.

Still, she is lovelier than ever she was,
Tho’ now love is mixed with fear.
Yet, when she calls them to arms, they go,
For these boys still love her.

For who can resist that hair so golden,
Eyes so crystal clear?
A voice so sweet, a face so charming,
Words so full of cheer?

#
The men of Aiden can now be found,
Lying upon their biers,
Or at the bottom of the Cold Stone lake,
Sullying the water, once so clear.

For they fought in the streets, on the docks,
Brave indeed, they were.
They fought to defend their city,
But even more, for her.

From Aiden's Palace did she rule them,
So far, who was once so near,
And I heard, when she sent them to die,
She shed copious tears.

Years pass, and she still lives, though –
Her grief, I’m told, was sincere,
But I wonder - does she ever think about them,
Those Lost Boys of yesteryear? 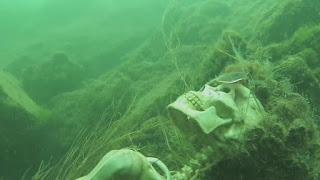