Blondie, Union City, and me.

This post was originally written under a different name in 2013. Am re-posting it with minor edits to celebrate Deborah Harry's 71st birthday. Of course, 71 is just a number. She's really immortal.

If you were watching sports in India in 2013, you probably saw, at some point of time, an advertisement for Mango (the fashion line, not the fruit), featuring Miranda Kerr. The soundtrack to the ad was strangely familiar to me when I saw it. It took a few repeat hearings to nail it. And that was when it hit me, riding on a tidal wave of nostalgia and emotion, that I was listening to a garbled version of Blondie’s Union City Blue.

The video of Union City Blue itself opens with a long shot of what looks like an Industrial port (Union City, NJ, one presumes, across the river from NYC).  The camera pans around the docked ships before eventually zooming in to what looks like a docking bay, where Clem Burke, dressed in a sharp suit, plays his drums on the higher level, while the other four members of the band stand below, wielding guitars.

And then there is Debbie Harry. She wears an orange full-body suit complete with a utility belt, of the style commonly associated with factory labour.

The song's beat has been building up, the sublime Burke ratcheting up the tempo to the first words from Debbie's mouth - "Oh ho, Oh ho, What are we gonna do?"

The line is typical, the opening mundane - an 'Oh-ho' start being so standard for songs with a female vocalist that one tends to discount the start altogether - and yet, in "Union City Blue", it's the note that tells you you're listening to Debbie - effing - Harry.

Madonna could not have sung the line without sounding plasticky. Britney could not, without sounding like she was faking an orgasm. Taylor Swift would've made it sound cute. Even Adele would have over-sung it.

Debbie Harry sings it with the kind of self-contradictory combination of longing and detachment that makes you wonder if you heard it right the first time.

As the video continues, the camera zooms onto Debbie's face, dominated as it is by the sunglasses (this is an outdoors shoot, people - back when no one really knew how to make a music video) and the glare of the sun on her face makes the visual a mess. It takes nothing away from her unmistakable beauty - high cheekbones, arched lips, two-toned dyed hair.

Debbie's effortless vocal delivery careens over the words expressing her longing for her Union City boyfriend as the camera shows us the flip side of the opening - the view from, rather than of Union City - New York's majestic skyline and the Lady of Liberty, before moving to a shot of the moon. It's now night, the boys are without their instruments and clapping while Debbie, even in the androgynous orange overalls, still manages to look impossibly seductive while dancing in a manner that combines equal parts exuberance and 70's-style crazy.  As the video closes to a shot of her marching playfully away from the camera as the boys continue to pirouette, the songs notes close almost abruptly and you're left wishing there was one more verse, one more time she caresses the words "Union, Union, Union City men" with her magical voice...

I first heard Blonde in the late 90's. Like, I suppose, a lot of young people growing up in 1980's Mumbai, my exposure to English music was restricted to nursery rhymes until the advent of FM radio, MTV and a chap in college who had a brother who knew someone who worked in Singapore and could get a cassette of Pink Floyd from there.  Of course, FM Radio and MTV only showed/played Backstreet Boys (for those of you who are too young to know them, they made One Direction sound talented). Guys in college generally listened only to the hoary legends of stadium rock – Led Zepplin, Pink Floyd, The Doors and so on.

To my limited musical consciousness, "women in music" were represented by Madonna, Britney Spears and the Spice Girls.

Then MTV (or was it Channel V?) played an old live performance of "Heart of Glass", and I had to tune in to the repeat later that evening to confirm that what I had seen and heard was not my imagination.

There she was, petite, elfin, hair that looked like they hadn't seen a comb in weeks, very likely stoned, wearing what should have been a cute-sy yellow-and-pink dress, hitting a note that was essentially "Woo-ooh, o-o , Woo-ooh ah-a". 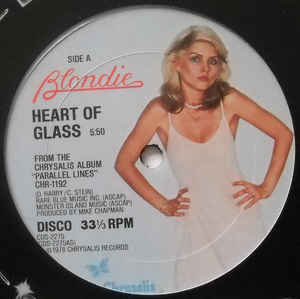 It should've looked and sounded ridiculous.

Her beauty should have distracted from her vocals.

Instead, it was pure magic, and she sounded superb. Debbie Harry owned that stage with no less legitimacy than the long-haired Rock Gods I had grown to admire and as for her beauty, it was something she seemed almost distastefully aware of.

"Yes, I look like this," she seemed to say. "What are you gonna do about it?"

Musical discovery is a long process when hindered by considerations such as exams, college and the associated huckstering that passes for an education. This was before YouTube, satellite radio and iTunes made finding music so easy it barely seems worth the effort. I had to ask around, find old issues of music magazines and look around record shops to discover the free spirit that was Janis Joplin and the remarkable ensemble cast that was Fleetwood Mac. Dolores O'Riordan's clear Celtic voice would haunt me, but it was Shirley Manson in whom the closest successor to Debbie Harry could be found - the Debbie of the 90's, perhaps.

Then, almost as if to remind us that the original was still around, Blondie released their comeback album, "No Exit", and gave us the opportunity to see that, even at close to 60 and looking it, Deborah Harry still had the voice, and Clem Burke, for all the brilliant work he had done on his own over the years, rocked with the band like with no other. After all, this was the band that gave us the brilliant lyrics of Dreaming, the morbidly uptempo beat of Atomic, the first mainstream rap song with Rapture, the disguised-lesbian love song Denis and too many more to list.

Of course they were still good. And even if they were not, it did not matter. Blondie was already immortal.

The unions of Union City may soon become a thing of the past, if they haven't already, and the New Jersey of today is as much a stranger to me as it was when I first heard the song, 15 years ago. (When Debbie filmed the video, I wasn't even born). And for all Miranda Kerr’s vaunted beauty and the HD clarity of the advertisement's video, it is not a patch – not even in the same ballpark – as the grainy, overexposed film of the original video.

For the magic, the control, the sheer mastery over the musical, vocal and visual medium that this song encapsulates; that moment when Debbie breathes magic into the mundane; that cannot be replicated…

Now's also a good time to check out Blondie's single from their album 'Pollinator', titled 'Fun',