Exploring the Slacker's Bookshelf - I 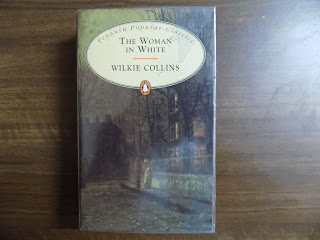 If you're a casual reader, Wilkie Collins might be the best writer you've never heard of. Collins was a contemporary and great friend of Charles Dickens, and his output was at least as prolific. Of his works, though, only two remain widely-read.
One of them is 'The Moonstone', one of the earliest 'detective novels', involving the theft and investigation into the said theft, of the eponymous jewel, and the quite shocking reveal at the end.
The other is this one - 'The Women in White', a sort of psychological thriller, with twists and turns, told from multiple points of view.
In their genres, both these novels were path-breaking, and Collins' popularity during his lifetime rivalled Dickens'.
In fact the darker and more mysterious themes of Dickens' later works probably has a lot to do with his association with Collins.
'The Woman in White', first came to my knowledge during early childhood, when a TV series called 'Shvetambara' used to play on Doordarshan. It was the story of this novel, adapted to 1980's India, and while I think it deviated from the main plot lines, it was intriguing enough that when I saw this book, I didn't think twice about picking it up.
I would also read 'The Moonstone' later, though I didn't have to buy it, inheriting it when my grandfather passed away.
The forerunner of many modern novels, these may seem quaint and dated now in their measured approach to mystery-solving.
Nonetheless, to me, they were thoroughly enjoyable reads, and The Woman in White, with its deeply sympathetic characters and the portrayal of the female protagonist as an independent woman with a high degree of agency, is deserving of its reputation.
The bleak illustration on the cover is a bonus.