This little bit of November balladeering came about from a dream of Ingmar Bergman's work. 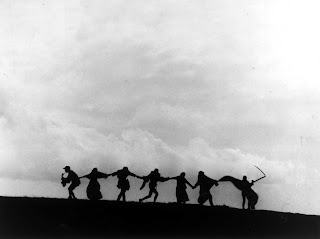 The forest folk, they sing a song,
As they watch the wild trees grow,
They sing of a girl with golden hair,
Deep in the dungeons below.

Yes, far below ground is her abode,
Under the castle Kilahenny,
Thick are the walls surrounding her,
And the men standing guard are many,

Deep is the moat a-encircling,
Filled with many a beast,
And were she to venture an escape,
They would make of her a feast.

But no walls, nor men, nor beasts,
No King’s bravado and boasts,
Can quiet her voice, nor dull her feet,
As she sings and dances with her Ghosts.

She has hair of spun gold, they say,
And a face like dawn’s awakening,
Like polished marble is her skin,
Her eyes are green and gleaming.

E’en in her straits so dire,
No man can look upon her, and be,
Unchanged, unmarked, unscarred,
By the vision that he has seen.

And yet, they do, tis said,
Those men standing at the post,
They look in upon her dungeon cell,
As she sings and dances with her Ghosts.

‘Tis said by those self-same Forest folk,
That she once was but a mummer,
With her father she sailed from port to port,
He, who was a poor excuse for a conjuror.

He purveyed tricks with smoke and mirrors,
But ‘twas her beauty that was prized,
And the boys who watched her despair’d,
Their wits, their senses hypnotised.

For her favour they swore to fight, to die,
Each swore he loved her the most,
They called her the Girl with Golden Hair
She who now only sings and dances with Ghosts.

She learned the mummer’s craft, all too well,
She could smile and cry at a word,
Her arts did make the small-folk gasp,
For not one, from their places could stir.

But when the curtain had fallen,
When the applause had quietened
She sang to the Goddesses; she sang to the Tides,
And they blessed her with skills unparalleled.

The most powerful wielder of magical arts,
Became she, in all the known lands of Mithos,
A creature, a sorceress, of awesome power,
She who now but sings and dances with ghosts.

She fought for justice, ‘tis said,
She fought for pride that was lost
She strove to take what fate denied,
And she was ready to pay the cost.

And so, little by little, and day by day,
The ghosts did rise up in her wake,
Many died who were evil and corrupt,
Many did she kill in her rage.

She gave justice where it was deserved,
She was more merciful, indeed, than most,
But now she has naught,
Nothing to do, but sing and dance with ghosts.

There came a man o’er the sea,
Bringing with him an army to tear,
Apart her beloved city, but he knew not,
Of the Girl with the Golden Hair.

For though of her he had heard,
He thought of her as little more,
Than a pretender with no claim other,
Than the ancient name she bore.

His ships lie still, at the bottom of the bay,
Off the bright blue coast,
His men, like him, are among those,
She sings and dances with—her ghosts.

Many were those who after her did lust,
But none could say he was her lover,
For though she smiled and sang with them all,
None could truly know her.

For no man nor woman could she trust,
Not even those who loved her most,
And now she has nothing and no one,
Naught to do but sing and dance with her ghosts.

Dark were her thoughts, and deep her secrets,
‘Tis written that she consorted with beasts,
Partaking in their unholy rituals,
Satiating herself with unholy feasts.

Until in an act of madness,
She did defy the Goddess’ will,
The ramifications of her choices,
Shape our world, still.

Death and destruction were never far,
Weighing and dragging upon her heart,,
And then came a War where fate had decreed,
She could take no part.

She watched them die, her friends, her lovers,
She watched warcraft overcome means unfair,
But though armies fell and heroes died,
Powerless was the Girl with Golden Hair.

Until they broke her silence,
Until they took her who she loved the most,
Terrible was her vengeance then, for she was ready,
She was ready to sing and dance with her ghosts.

The ground trembled, the skies came apart,
Forests and mountains were ripped wide,
And cities fell like breaking toys,
Before the fury that could not be denied.

A civilisation died at her hands, that day,
But the damage was innermost,
In the loss, in the madness, of she who could have saved us,
She who now only sings and dances with her ghosts.