Book Review: Our Lady of Alice Bhatti, by Mohammed Hanif

This review was written some three years ago, I think. At a time when I could still read a book by a Pakistani author about Pakistan and, if I squinted a little, and allowed myself not to think too hard, could believe that what applied to 'them' did not apply to 'us'.

That time has passed. Change the names, change the identities, and this could be about us. So much, us. 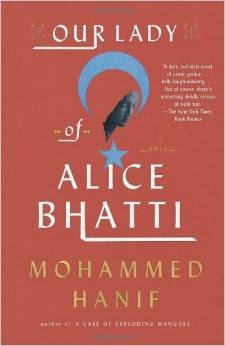 It’s an unconventional, not-so-little title, is “Our Lady of Alice Bhatti”. And it’s an unconventional, not-so-little book. Written by Mohammed Hanif, (who must surely count as one of the sub-continents better writers, and not only because competition is so thin), the book explores through a wickedly funny narrative of intersecting destinies, the condition of a member of the minority community in Pakistan.

It tells, as one might guess, the story of Alice Bhatti, a motherless Catholic woman in Karachi whose life is full of the little acts of bravery that perhaps only someone who actually has walked in her shoes can really understand. It’s the big acts of defiance that stand out though – her outbreaks into violence when pushed just a little bit too far. Hanif's writing is elegant and evocative – he manages to bring a smile on reader’s face every so often, even as the heart is outraged at what Alice has to undergo – and from casual disrespect to outright insults to attempted rape, she goes through a lot.

For make no mistake about it, underneath the deadpan humour style of narration is a searing indictment of Islamic Pakistan’s treatment of its Christian minority.

Alice Bhatti works well as a central protagonist. Gutsy but practical, defiant but believable, and oh-so-human even when deified by her patients, she remains the vulnerable but strong focal point around which the book revolves. The flow tends to go back-and-forth a bit, and some incidents are sprung upon us a little too suddenly, but it’s largely by design, and Hanif never loses the thread or allows the reader’s interest to wane for a moment.

The support cast is delineated with skill and substance. The ward boy who nurses a crush on Alice, the police informer and hero-cum-villain Teddy, Alice’s benignly neglectful father, even the relatively minor characters like the senior doctors and nurses, are drawn in strokes that are broad but firm.

The story itself stretches over a span of about a year, with flashbacks. It covers Alice’s career as a nurse at a decrepit Christian missionary Hospital. In an atmosphere of stifling majoritarianism as well as a yawning class divide, she tries to retain her independence, dignity and faith. Her story intersects with that of the police informer, Teddy Butt, and the air of grim anticipation begins to build up. There are light moments, there are moments of happiness, even, but as the story hurtles towards its climax, there’s a sense of foreboding that turns out to be all too justified.

There are flaws for nitpickers – certain aspects of the story are not resolved, the ending is a bit hurried, some bits might require a minor suspension of belief, but Our Lady of Alice Bhatti remains a brilliant book for all that.